And do you recycle your used cooking oil at home?

Containers for used cooking oil start to appear in the neighborhoods next to recycling bins for plastic, glass and paper. More and more localities experiment with household UCO collection systems, however, recycling on a large scale is, so far, done only in a handful of EU Member States. Will this trend manage to catch on?

The, so called, Fat, Oil and Grease (FOG), that are left after cooking and baking both in restaurants and in individual households can cause serious blockages in the drainage systems if poured directly down the kitchen sink. Around 75% of all sewage blockages are caused by FOG. In the UK, for example, water companies spend 100 million euros every year to clean the blocked sewage pipes. These costs could be successfully decreased if not only restaurateurs but also people at homes started to properly dispose of their used cooking oil.

How does it work?

The oil left after cooking and frying, instead of being washed down the drains, should be cooled down and poured into a special container or a plastic bottle or jar. Once full, the container has to be taken to a marked collection point where the oil can be properly disposed of and recycled. These are most often located in highly frequented places such as shopping malls, open-air markets, parking lots, schools, streets, etc. There are slight differences between the ways household collection is organized in different towns and regions, however, the idea behind remains the same: to prevent the used cooking oil from getting into the sewage pipes.

The UCO brought by individuals to the special collection points is taken to the cleaning plant where it undergoes filtration before it can be further transported to a waste-based biodiesel producer. Later on, UCOME (biodiesel made from used cooking oil) is blended into diesel and used in transportation.

Who does it best?

UCO collection at households in the EU is not yet well developed. In fact, in majority of the countries there are no special recycling points dedicated to used cooking oil coming from individuals. However, such countries as Austria, Belgium and the Netherlands have already succeeded at establishing country-wide household UCO collection systems giving other Member States an example to follow.

Austria is the pioneer in Europe with up to 1 kg of UCO per capita being collected across the country. 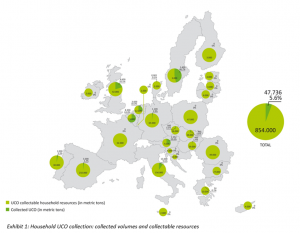 The Belgian system, after 12 years of functioning, is the best developed household UCO collection system in Europe with 8,300 MT of oil collected in 2014 (0.73 kg of UCO per capita).

Unlike in Belgium, where household UCO collection is regulated by law, the collection in the Netherlands is a voluntary initiative. It is organized by an association which co-ordinates several partners from the whole supply chain: collectors, biodiesel producers, local authorities, sewage cleaning companies. The collected UCO is used to make biodiesel.

Even though the population of the Netherlands is 50% bigger than that of Belgium, the quantities of UCO collected in 2015 amounted only to 3,660 MT which is 0.21 kg of recycled oil per inhabitant. It accounts for around 30% of total estimated collectable resources of household UCO in the Netherlands. In Belgium, however, around 64% of UCO produced at homes gets collected. It has to be remembered, though, that the quantities of used cooking oil produced by individuals vary from country to country due to different culinary habits. In some Member States such as Belgium, the Netherlands or Spain, eating fried food is more common than in Scandinavia, for example. Therefore, the potential resources of used cooking oil that can be collected per capita differ between countries.

What is the potential?

In Italy and in Spain we estimated the potential resources to be above 380,000 MT per year (for both countries together). Germany and France are also big markets with more than 50,000 MT tons to collect in each of the countries. For figures for all Member States please refer to Exhibit 1.

The potential growth of UCO collection is easier to estimate in the professional sector than in the case of households. It is because the former is generally regulated by law while the latter depends on a number of factors that are difficult to measure, e.g. recycling habits, cooperation of local authorities, urbanization, etc. At the same time the oil consumption in the EU is falling down which is caused mainly by growing health awareness among Europeans. This will decrease the potential household UCO quantities in the EU. OECD estimates that the consumption of oil for food purposes will fall in the EU by 1.31% by 2024.

Not as easy as it looks

Even though household UCO collection might seem relatively easy to organize, there is more to it than meets the eye. As the success of such a collection system heavily depends on the participation of individuals, the crucial part is to convince people that they should recycle their oil instead of simply pouring it down the kitchen sink and that they should do it every time they cook. In other words, it is necessary to win with people’s laziness.

Once we have the inhabitants’ attention and willingness to collect their used cooking oil, there is a number of operational difficulties to consider. A survey carried out among UCO collectors in Europe showed that the biggest issues they see to make the household UCO collection successful are its costs, limited quantities that are also hard to predict as well as lack of agreement with local authorities (see Exhibit 2). 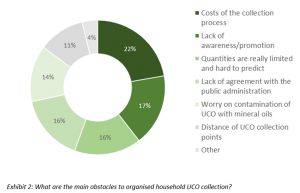 According to the same group of collectors the key factors to the successful UCO collection from individual households are advanced and well-organized collection systems (41% voted for that answer) and education about the necessity and benefits of recycling UCO (32% of the interviewed collectors).

However, once there is willingness of people to recycle their used cooking oil, there is a number of operational issues to face. As household used cooking oil comes from a multitude of microsuppliers (individual families) sustainability certification is hard to get. The quality is also difficult to predict as UCO can be easily contaminated with mineral oil due to lack of knowledge of the inhabitants or their inattention. This, in turn, increases the cleaning costs which are already quite high.

When it comes to financing the collection of used cooking oil at homes, apart from the regular infrastructure that has to be set up, large amounts of money have to be calculated for the advertising campaign. In Belgium, for example, the promotional activities to popularize household collection cost around 1 million euros per year. This certainly puts the financial viability of the collection from individuals at stake.

How do they do it?

As the experience of some of the EU countries show, in order to succeed the approach to UCO collection from households should be adjusted to the attitudes and lifestyle of local people. Convincing people in one region to recycle their UCO may require totally different means and measures than involving inhabitants of another Member State in the same activity. Thus, it is important for collectors to figure out in advance what will work in their locality or country and what will most definitely not be successful.

Belgium went for a nation-wide omnipresent campaign by creating a highly recognizable image for the whole initiative. They cooperated with a professional advertising agency to design for them a concept of the Oil Ghost that gave an identity to the campaign of Valorfrit. It was used in all media channels, from pamphlets to TV spots in order to increase the visibility of the initiative and make people more familiar with the whole concept. In order to give more incentives to the individuals they also organized “Mois de la Grande Collecte” (Month of Great Collection). Each inhabitant bringing at least one litre of UCO could enter the lottery to win bicycles, movie tickets, or a trip to New York. Such initiatives are organized regularly to create habits of collecting UCO at homes and to actively involve the citizens as much as possible.

In Italy, one of the collection systems called Per Olivia, puts a lot of effort into education of youngest generations. They co-operate closely with local authorities and schools organizing various events such as the so called Olii@mpiadi, a competition between schools for who will collect more UCO per student. They also run a very active Facebook page to be closer to individual people in order to help them understand the why and how of household UCO collection.

In such countries as Sweden, for example, where the habit of recycling waste is already part of everyday life, not much advertising is necessary to convince people not to pour used cooking oil down the drain. Therefore, a wide advertising campaign was not necessary there and household UCO collection was simply added to regular waste disposal and is managed on local level.

Given the fact that professional UCO collection from restaurants, hotels, etc. is already quite mature in Europe and gives limited growth possibilities, household collection of used cooking oil might be an opportunity for increasing its supply. Even though the potential volumes to capture seem to be quite high at more than 800,000 MT, collection of UCO from individual households is a challenge to organize.

Its success is determined by people’s willingness to participate in the recycling of used cooking oil and by their doing it regularly and thoroughly to ensure the continuity of supply and thus financial viability of the collection system.

As the infrastructure for household UCO collection in most EU countries is not developed yet, capturing the abovementioned quantities of UCO that are annually produced at European households may prove to be extremely difficult and will require, in the best case, several years of hard work. However, in the current market situation where there is no long-term price visibility for UCO and the prices are very volatile, we do not really see investing in the household collection systems as a lucrative opportunity. There might be some potential for development in case of regular subsidies coming from the EU, the governments or other institutions that would ensure the financial profitability of such an unsure investment.