Back to the list
Article Biofuels, Waste based biofuels

Even though more and more players join the HVO market, the key issue of feedstock supply still remains: how to move from veg-oils to waste-based feedstock and improve the sustainability of Green Diesel production? Yet, new HVO producers mean that in the not-so-distant future the near – monopoly of Neste might be brought to an end, which should increase market liquidity. What will be interesting to watch, though, is how the prices will react to more ample and diversified HVO supply?

In the last 5 years, the Hydrotreated Vegetable Oil (HVO) production has been developing rapidly. More and more oil majors, such as ENI or TOTAL or dedicated renewable fuel producers, e.g. UPM or Preem, started investing in HVO production units. The growth has been especially visible in Europe and in the US. However, companies from the Middle East or Asia do not plan to stay behind. There is growing interest coming from the Asian market that might soon change the map of the HVO sector. Although Neste is still dominating the world HVO scene, new companies investigate the possibilities to invest in Green Diesel production. And even if the majority of new projects are located in Europe or in North America, we should not underestimate Asia’s chances on the HVO market. 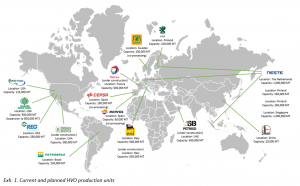 Currently on the market

If, by 2020, all the announced HVO projects come into life, the world production capacity should grow by more than 40%. Currently, the installed capacity around the world is 4,745,000 MT but within the next 4 years it can go up to 6,775,000 MT (+43% growth). There are some other projects under investigation in Eastern Europe, Japan, China and the Middle East that could further add to the Green Diesel capacity which could then easily trespass 7 million MT. However, with the exception of Neste, the new plants are not yet using all their productive capacity so the actual production initially will definitely be lower than their full capacity.

Europe will remain, by far, the leader on the HVO market with 3,870,000 MT of installed capacity by 2020. The runner-up will be North America with 1,155,000 MT which is, though, less than 50% of Europe’s planned capacity. The third biggest producer will be Asia, with, at least, 1,020,000 MT installed. It is hard to estimate when the new projects in Asia will become reality and what will be their actual capacity, however, there is vivid interest there to invest in HVO production that is visible predominantly in China but not exclusively. So far, the 1,000,000 MT operating there comes from the Finnish producer, Neste, while the remaining 20,000 MT belong to Sinopec in China.

It is important to note that in spite of higher CAPEX and implementation difficulty compared to co-processing or regular FAME production from esterification, all the companies decide to invest in pure HVO production plants instead of trying co-processing. It is because, in the long run, pure HVO production gives more possibilities. Apart from being used on its own as drop-in or jet fuel, it can be also blended with off-spec diesel to improve its parameters. In the case of co-processing, there are no such opportunities as the product is already mixed at the production stage. Currently the co-production capacity is at 650,000 MT and should stay at that level with no major investments announced. 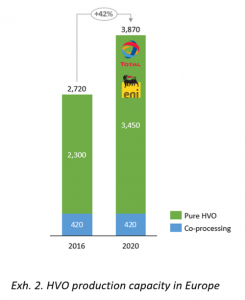 It is also important to notice that the new HVO investments are being incorporated into the already existing refining units and not built from scratch. This helps to lower the investment costs and speed up the construction process.

Assuming a very positive scenario of all the announced and installed capacity running in 2020, HVO could take up to 23% of the European biofuels market.

Neste and the runners-up

The Finnish producer of HVO is an absolute forerunner on the world scene with four production plants: two in Finland, one in Rotterdam and one in Singapore. With installed production capacity being around 2.5 million MT per year, their current share of the market exceeds 50%. And with every quarterly report, Neste continues to impress with production output, margins and utilization of waste-based feedstock. The actual production of HVO in Q3 2016 reached 631,000 MT which is their absolute record. The share of waste and residue feedstock in the third quarter was as high as 79%. However, it has to be remembered that animal fat category 3 and PFAD are considered here as waste while this classification is widely questioned.

In Italy, ENI has already started production at its Venice plant and the actual output is currently at 350,000 MT per year. The company plans to have both plants, the Venice one and the one in Gela, Sicily, working at full capacity by 2019. The planned output at that time is 1.2 million MT. 2017 should see the start of operation of TOTAL’s plant in La Mede, France which will add the production capacity of 500,000 MT to the European HVO sector.

In the US, the key players are Renewable Energy Group (REG) and Diamond Green Diesel with total capacity of 750,000 MT per year. Diamond Green Diesel is a joint venture of Darling Ingredients and Valero and has recently undergone an expansion by more than 70% to 800,000 MT of Green Diesel per year. This makes them, by far, the biggest producer of HVO in the US. Following the development of the HVO market, the sales of REG also went up. They jumped by 36% in Q3 of 2016 increasing the company’s profitability. However, it is interesting to notice that the profitability of Renewable Energy Group’s HVO production is nearly 6 times lower than that of Neste.

It is uncertain, though, when (and if) two of the planned HVO projects will be finished. The US plant of Emerald Biofuels was announced already in 2012 but its possible finalization date is not yet known. The plant in the UAE by Petrixo was announced back in 2015, however, it seems that the works have not yet started. Both projects plan to use the technology of UOP / Honeywell. The future of Green Diesel production at the plant of Petrobras is also a big question mark.

Finally, there are a few projects under investigation in Eastern Europe, Middle East and Asia. 2017 should bring some new announcements that will further expand the HVO world production capacity.

Two main markets: US and EU

Although the production of Neste takes place in Europe and in Asia, the company’s main market, except for the EU, is North America. It is the US blenders’ tax credit available last year that significantly helped the company to improve their margins.

In Europe, one of the pioneers in using HVO is Sweden where, in Q2 of 2016, HVO’s share in biofuels mix was 75% for blended biofuels and 76% for pure product used. Statistics Sweden predicts that the volumes of HVO used in the country might grow even further in the next quarters.

After the introduction of GHG emission savings system in Germany, the use of HVO there started to decrease. In 2015, the share of HVO was at 7.6% there. It is because, on average, the Green Diesel used in Germany has the GHG savings of 61.78% while, for example, UCOME can go much above 90%.

Interestingly, the government of Malta in its National Action Plan showed the willingness to blend HVO starting from 2018. The country plans to fulfill 8.5% of its B7 mandate with Renewable Diesel.

There are two other newcomers in the HVO game who are focused exclusively on the renewable jet fuel production: Sinopec in China and AltAir Fuels in the US. In the case of Sinopec, it is very difficult to obtain accurate information about their current production volumes or plans for next years.

AltAir Fuels started its production in the last quarter of 2015 and has already secured a regular supply contract with United Airlines for deliveries to the Los Angeles airport. The capacity of the plant is 125,000 MT per year.

HVO undoubtedly has potential to help develop renewable aviation fuels, however, it may not happen in a very close future. Even though the European Advanced Biofuels Flightpath has an ambitious goal of using 2 million tons of biofuels per year in aviation, achieving that will definitely take some time.

Neste has recently announced the acquisition of the Sluiskil plant in the Netherlands that will be used as a pre-treatment unit and storage for their waste-based feedstock. TOTAL as well as ENI also included such raw materials pre-treatment units in their HVO plants in order to be able to process a wider range of feedstock types into Green Diesel. However, with the shortage of UCO and other waste-based feedstock types on the world market, such investment might seem short-sighted. But there are two main reasons for doing so. First of all, using UCO or animal fat increases GHG emission savings of the final HVO fuels which, in turn, improves its competitiveness. Secondly, it is a strategic decision to show that not only PFAD or CPO are used in the production of Green Diesel and to avoid sustainability issues. As the lobbying against palm oil in Europe is getting stronger and stronger, the HVO producers will have to find ways to prove their production is sustainable and to avoid the scrutiny. This, for sure, will be a significant challenge in the years to come.

In the next few years it will be interesting to see if all the planned projects are indeed realized. While there are no doubts about TOTAL’s La Mede plant, for example, the plant of Petrixo in the United Arab Emirates remains a big question mark. However, at the same time, there should be new announcements about HVO investments planned, especially in Asia. This is, for sure, the continent to watch in the next few years as the waste-based feedstock resources there are still vast and such countries as China, Indonesia, Malaysia, and Japan have strong ambition to increase their share of the world biofuels market. There are also voices about possible plants in the Middle East or Eastern Europe which could add to the total world HVO capacity.

The supply of HVO, however, will largely depend on how fast the new plants will be able to achieve full or nearly-full productive capacity. HVO units, due to relatively high CAPEX costs, need to use all the production possibilities of the plant in order to be profitable. That is the case of Neste whose plants are used in nearly 100% unless there is some technical break to be made.

The increased supply of Green Diesel in the next years should positively influence liquidity of the market. Increased availability, in turn, could put some pressure on the prices breaking the current near- monopoly of Neste. Price development of HVO thus will definitely be the factor to watch in the next few years.

In the light of new legislations putting more pressure on the GHG emission savings of biofuels, HVO producers will be forced to incorporate an increased percentage of waste into their feedstock to be competitive. If produced from palm oil or palm-derived materials, HVO’s GHG emission savings are often below 70% which is very low compared to UCOME, for example, whose results are well above 90%. For that reason, Neste announced that they will conduct tests on processing UCO into HVO at their Finnish plant. They aim to process 20,000 MT of UCO (mainly coming from local sources) during 2017 to have some conclusive results on the suitability of the feedstock. This, however, will put even more pressure on the UCO market in Europe where the waste-based feedstock shortage already causes fierce sourcing competition.

With so many investments in the HVO production around the world and the impressive production capacity growth rate, the question remains, will Green Diesel find enough markets? How will the price trend and the margins of the HVO producers develop? How will the legislation and mandates change in the EU or US to accommodate the HVO producers? Will the HVO industry manage to successfully diversify their feedstock supply to use not only palm-based material?